When autocomplete results are available use up and down arrows to review and enter to select.

The Ground Penetrating Radar was originally developed to meet a UK MOD requirement to located plastic landmines. Since then the technology and equipment has advanced significantly and now has a myriad of uses both within the military and public sector, including Police and Military Search, VIP Porotection, Counter Surveillance and commercial surveying.

By sending ultra wide spectrum RF energy pulses into the medium under investigation, the system is able to generate images of sub-surface features regardless of the material composition. Plastic, wood, metal, voids, concrete, rock...as long as there is a difference between the object and the surrounding material, the system can create an image.

A metal detector sends energy into the earth in a small number of frequencies (up to 17). When the transmitter passes over a metallic object, that object becomes energized and then in turn emits a signal of its own. The metal detector then receives this signal and translates this energy into a user recognizable tone. The Ground Penetrating Radar works on the same basic principles. However, by sending microbursts of a wide range (thousands) of frequencies, the Radar is actually able to detect a number of materials whether conductive or not. 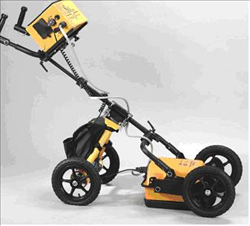